A restaurant is a business where you are required to market your personality. Although this is true in many jobs, one distinguishable trait about restaurant employees is that the personality they market to strangers drives them to become the opposite of the person they portray.

A slick businessman might find that his success in his job is credited to the same traits that make him cunning and shrewd in his personal life.

A waiter who goes into restaurant work with a shining and upbeat personality may find himself trying to escape that personality in his off-time by being miserable and emotionally taxing around others. 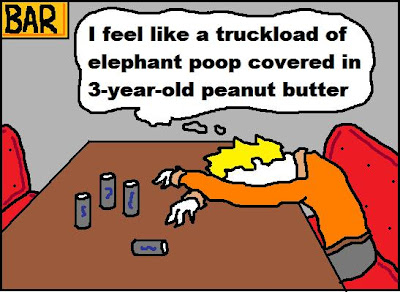 It can also go another way.

I remember last summer, a group of my coworkers and I were having a particularly bad evening. There had been large parties right after big functions, there were lots of mistakes made, high-strung management figures had been laying down the discipline, and in general, nobody was in a very good mood. The whole lot of us (totaling about fifteen people) had just been asked to leave our favorite after work watering hole for a combination of reasons, and we proceeded to drunkenly stand outside of the bar, continuing to gripe and smoke cigarettes like a discombobulated group representing every role ever played by Clint Eastwood. 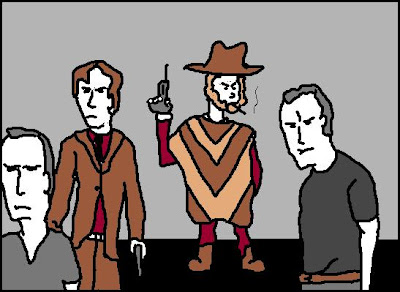 Before long, some Irish girls randomly walked by and asked us for directions to a bar that was nowhere near that location. 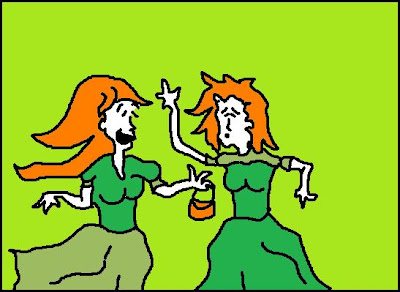 Because I was drunk and hazy, the above picture is the only memory I have of what the Irish girls looked like. They probably were not walking stereotypes as I portrayed them, but I do remember them telling me they were from Dublin. I do not remember them singing loudly or talking about Guinness, but I think I might have made an inappropriate IRA joke. My friends and I decided to direct them to a form of transit where they could get home (or wherever they were staying), but we were very drunk. And I don’t think we helped them very much.

Suddenly, a gang of punks walked by us to interrupt our being “helpful.” They started being more “helpful” by flirting with the Irish girls better then we were. Since we were all still kind of angry and their “help” was being better received, we became irate.

We squared off with the group of kids who were raining on our international flirting parade. They had tight clothes, jean jackets, and weinery haircuts. We liked our odds. 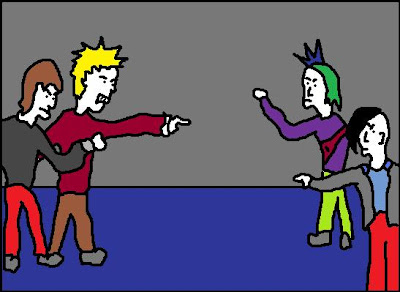 Needless to say, being outside of the restaurant after it robbed us of our patience, personality, and clemency, we weren’t an agreeable bunch of fellows. Our Nepalese food runner ended up swinging a chair around like a battle axe, one of the crazy female waitresses shoved one of the people over a poorly-placed flowerpot, and our Northern Californian hyphy-gangster bartender damn near dropped someone with a head butt. 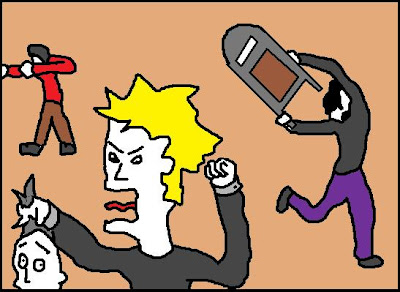 At some point, the Irish girls left in terror, never to be seen again. The staff of the bar came out to tell us that the police were on their way. We took off, and so did they. Strangely enough, a few of the opponents were parked right in front of where we were parked. We approached our car, and they stood ready.

Instead of a fight (which we fully expected in rebuttal), we squared off again while my buddy reached into his pocket. He pulled out his keys and unlocked his car. As soon as it happened, both parties entered their vehicles and left. It was incredibly anti-climatic.

We left. I guess both parties just needed to blow off some steam. After all, we were all probably working doubles tomorrow at different restaurants.
Posted by King Devon the Magnificent at 12:49 PM