I was reminded of something as business in the restaurant wound down late last night. I was waiting at the front, thanking restaurant guests as they left. One woman in particular left and then re-entered about ten seconds later. She looked to be in her mid fifties, had grayish hair, and probably wore a fanny-pack. Or didn't, I don't know. Even if she didn't actually have one, something definitely made her seem odd. She stared at me for a few excruciating seconds. 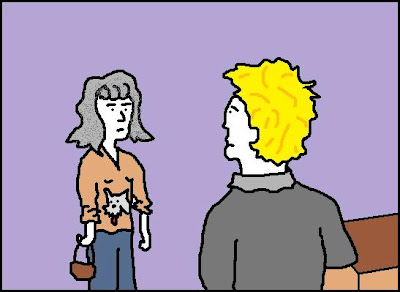 After a prolonged stare, I decided to re-break the silence.

Me; "Coming back for a second dinner?"

Her; "No....there's someone smoking right outside and I don't want to walk by him."

In situations like this, I realized that sarcasm is not only a necessary way to cope with odd people who go out to eat, but a fantastic security blanket. I let the conversation progress naturally. 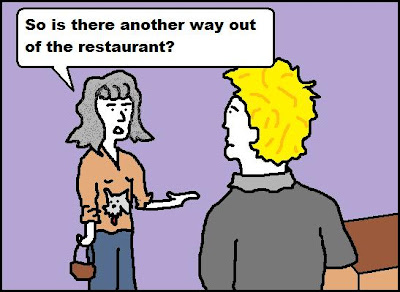 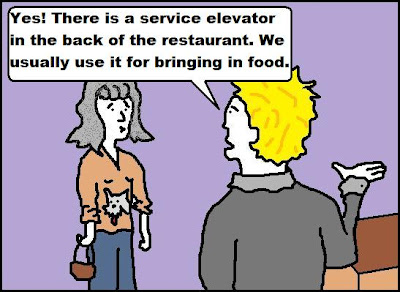 Instead of offering her a sensible solution, I decided to push against the boundaries of her ridiculous needs with equal and opposable force. 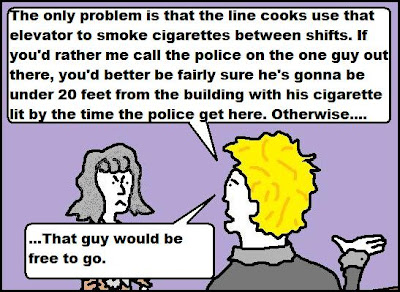 I knew there was something off about this woman. She even continued having a conversation with me about how to solve the cigarette-smoking problem after I proposed that she instead take a fire elevator that smelled like fish instead of just walking out the front door. Then I remembered that I had waited on her before... 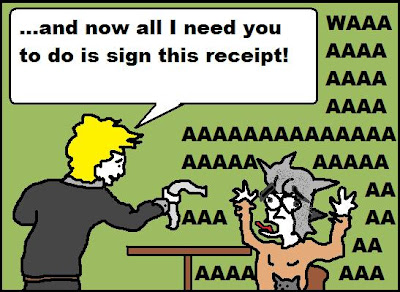 Granted she probably didn't react as drastically as I portrayed her in the dramatic recreation posted a half-inch upward, she definitely freaked out about having to touch receipt paper.

Me; "Now if you'll just sign your credit card receipt, we'll be all--"

Her; (Disgusted look) "I'm not touching that."

Her; (Throwing her hands in the air) "Haven't you heard the news? There's a chemical in receipt paper called CHT that gives you cancer!"

Me; (Audience participation--choose your favorite line)

B - "In that case, I probably have 8 cases of cancer in my index finger alone."

C - "Then why did you use a credit card? Or is that same chemical even more abundant on American currency?"

The truth is, I don't remember what I said to her on that particular occasion. All I know is that on both occasions, I employed subtle sarcasm to help keep me from rolling my eyes and saying something that would inevitably get me fired. With most people older than 40 who have little else to worry about than hypochondriac cancer, your best bet is to feign some kind of concern while subtly implying that they are overwhelmingly easy to make fun of.

When you go out to eat, you'll do well to notice if your server is making fun of you. If you have a request that is extremely particular but are mildly afraid to ask it, see how your server reacts. If he or she reacts with an extremely acute attitude of concern but offers grandiose solutions, you're probably being made fun of but don't realize it. Joke's on you.
Posted by King Devon the Magnificent at 1:58 PM