The Rules of Booze

In the service business, there are guidelines. Not only are there rules you have to follow within the restaurant organization, but there are often laws which dictate how you are to do your job that are regulated by some level of government. Exactly how you have to navigate these rules varies when you’re confronted with restaurant guests who are not only ignorant, but irate becomes tricky. 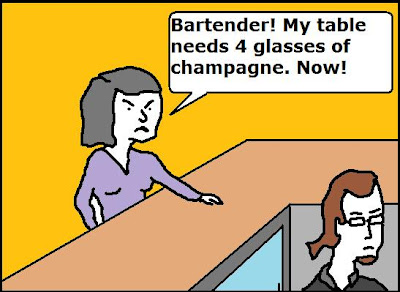 The woman of about sixty approached the bar from one of the tables in the restaurant, and in what was later determined to be her most polite tone of voice, demanded four glasses of champagne for her table. The problem? Everyone at her table had just received beverages, and they hadn’t been touched. The state law where this restaurant is located strictly prohibits having more than one alcoholic beverage at a time on the table. 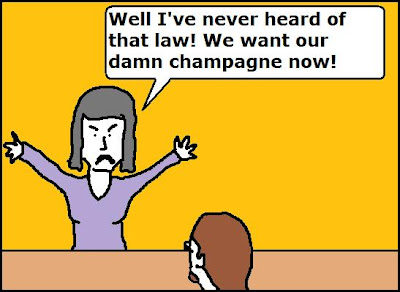 Of course she hasn’t heard of that law. So by no means is she obligated to follow it.

The woman kept crooning over and over to the bartender about how someone at the table recently got engaged, and that it was absolutely ridiculous that she couldn’t have the champagne. The reason she left the table and went up to the bar was because her server told her the same thing the bartender had just finished telling her. Instead of embracing this new knowledge (that was reaffirmed by two separate people nonetheless), she continued being irate.

If you've "never heard of a law," it doesn't make you exempt from obeying it. Just because you're celebrating, it doesn't give you a free pass to demand that a server risk his or her job to placate you. If an officer stops you in your car for running a stop sign, it wouldn't quite pan out in the field to say that you've "never heard of any law" that says you have to stop at a stop sign. You'd get a ticket.

The bartender walked away and proceeded to take care of his other patrons, because those were the ones who were paying him, and as an added bonus, not ridiculing him.

She shouted for him again. 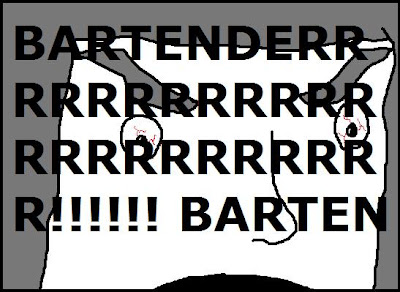 So the bartender did what any level-headed server would do. He approached her again and greeted her as if they had never spoken.

Eventually, after complaining loudly and apparently ruining someone's engagement party, she returned to her table. The cranky bitch was approached by a manager, which is the next step in the issue-resolving process. Instead of four glasses, the manager suggested that he could bring over a bottle when they were finished with their current beverages (running the total number of people reaffirming the existence of this law to 3). 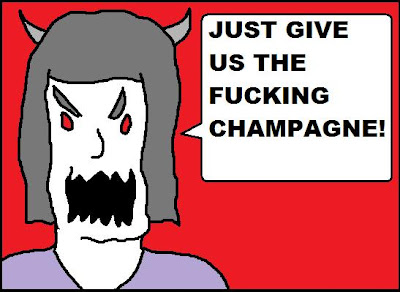 "Just give us the fucking champagne."

The fact that this woman sunk so low as to not only demand her needs be met, but to order someone to violate a state law, and then swear at someone who was trying to help her makes her in a class of her own. The type of evil bitch this person is deserves to be locked away in the deepest pit of special Hell to be tormented for all eternity. On a celebratory occasion like an engagement, you ruin everything when you get carried away forgetting that you are not the center of the celebration.

The rules and guidelines of the restaurant business as well as of the state and country leave you few options for dealing with scum like this. You simply have to placate them as they continue to scream, cry, and throw fits like infants until they get their way. Any retributive action on your part, such as telling her to "shut her pie hole," flipping over her table, or using violence to teach her a lesson would get you arrested, or more likely, even fired.

There must be something we can do. For those reading this? Don't be that lady.
Posted by King Devon the Magnificent at 2:15 PM