Paying the Bill; A Duel of Honor

There are very few situations in the daily fray of serving tables that put you uncomfortably on the spot through no fault of your own. People usually don't go off on you if you've done nothing wrong, but very occasionally they do. Sometimes, all it takes for you to be put on the spot is something simple like dropping the check.

From here, there are a couple ways it can go down. 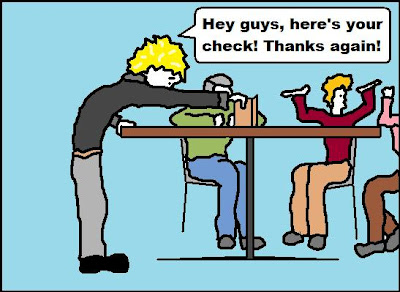 You don't even have a chance to let go of the check before the tug of war begins. 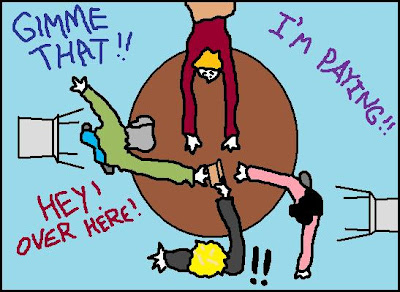 This situation is a bit awkward because people will try to steal the check from you before you put it on the table. If multiple people go for it at once, you could be in the middle of a violent scuffle. When one person tries to put his or her card in the book and give it to you, it's usually a combination of them smacking you with it and fending off the grabbing hands trying to supplant the card in the book with their own.

After getting the wind knocked out of you by a checkbook, you also get displeased grimaces and slow, patronizing head shakes from the others at the table who wanted to pay. 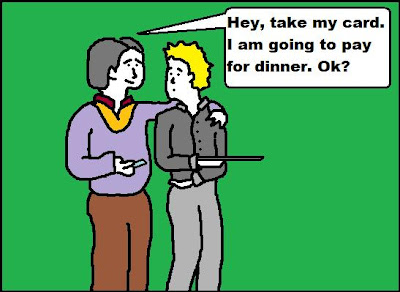 If you get approached, someone (usually a foreigner) will discreetly hand you a card so that nobody else gets a chance to pay.

The problem is that when you go back to announce that someone else has already paid, you get the death stare from everyone else at the table. 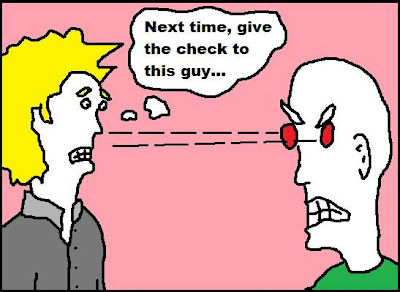 The check drop can also be a bit perilous because of the pending hazard of samurai-like dueling between the restaurant patrons. 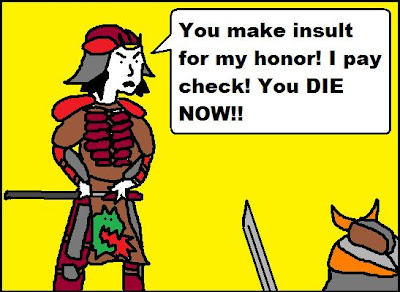 When people start fighting over a check amongst themselves, I find that it's best to back away slowly and without saying a word. They'll sort it out eventually, and hopefully you won't have to witness an actual decapitation before you go to process the payment.

The best part is, I do this when I go out to eat too. I have no idea why.

One of the things that stands to reason when people fight over the check is that they are typically generous. Since they have no reservations about paying for the dinner that their families and friends just had, they probably won't mind giving you a generous tip for all your hard work.

That's a myth--I've had people fight tooth and nail over paying the bill, but then left me maybe 5%-10% maybe about a third of the time. It simply doesn't make any sense.
Posted by King Devon the Magnificent at 10:38 AM