A waitress friend of mine passed a story along to me recently that I couldn’t pass up an editorial on. When you have been blessed by the bizarre circumstance of having to wait on a weird family whose minds have been poisoned by paranoid America, then God help you.

As servers, we all fear those who have way too much to fear.

She brought her family into the restaurant and instantly summoned her waitress. 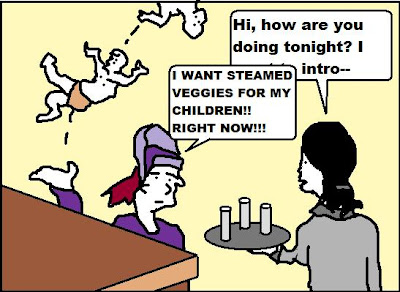 Instead of listening, she immediately made a few demands. She asked specifically for bizarre vegetables for her children that most restaurants don’t have. She wanted things like cauliflower, asparagus, green beans, and (wait for it) “Steamed kale.”

She was the kind of hippie that made regular hippie’s highs come down. Imagine a 40-year-old artsy old bag who wished she had a hand in planning Woodstock. Now imagine the kind of dominance she had over her husband. Note - He was wearing a toupee that looked like a cross between Nick Nolte and a barrel of illegal fireworks. Within five minutes of entering the restaurant, he left suddenly to accept a phone call. Presumably from his wig sponsor. 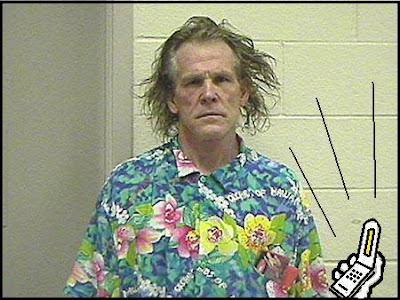 As my waitress friend approaches, the mother is inconspicuously throwing her family’s belongings into a trash bag. 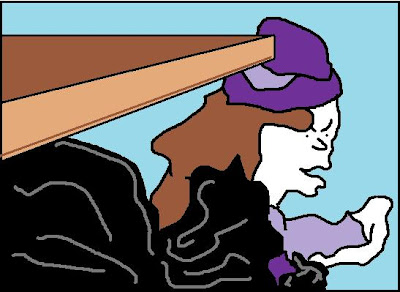 So besides being extremely needy right off the bat and having a husband with weird fake hair immediately accepting phone calls, there weren’t too many warning signs. But the fact that she immediately started putting her family’s coats and gloves into a trash bag underneath the table that she brought into the restaurant with her was a bit odd. That’s something homeless people do.

We have to assume she wasn’t homeless however. How do I presume to know? I am fairly sure homeless people and their families don’t have three distinct sets of allergies. And judging by the trash bag? She was probably a paranoid germaphobe.

My waitress friend found out about all of the allergies when the health-conscious mother of the family asked that there be no salt, pepper, seasonings, garlic, oil, butter, gluten, or anything that results in there being a flavor of any kind. At this restaurant, if anyone gives any indication that there may be hazards with any of the food, the servers are required to ask if anyone has any food allergies.

Now the children (who were around 12, 8, and 6) then started shouting out of turn what their allergies were. 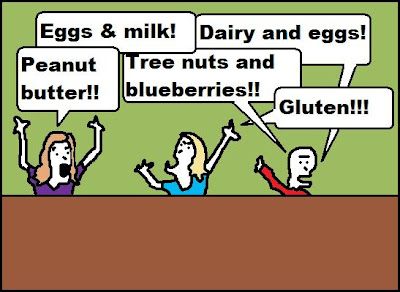 The mother’s response to the question was that “there were too many to name.” In my opinion, if you are a halfway responsible parent with children that have life-or-death food allergies, you wouldn’t leave something like that to chance. Unless you’re just an overbearing hypochondriac health nut.

Before my waitress friend could even ask about a basic beverage order, the hippie woman interrupts to introduce herself and her children to the waitress. According to my friend, she had “some yuppie name like Bridget, and her kids were like ‘Flower‘, ‘Zodiac‘, and ‘Starship’ or some shit like that.”

By this point, my waitress friend had given up on the idea of suggestive selling, and resigned to bringing them iced tea or lemonade. In typical hypochondriac fashion, the woman grilled her for all of the ingredients in both of those things (I’m betting there isn’t another person on the planet who doesn’t already know what two ingredients compose ‘iced tea’). After shooting those down, the woman decided she wanted water instead. Simple enough? 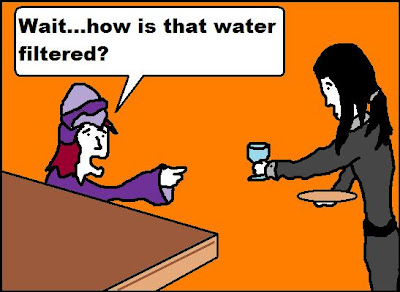 After resolving it with a round of bottled water and a couple reassuring lies, they finally get around to ordering dinner. They didn’t hold back--appetizers, enormous lobsters, filet mignon, very nearly the entire menu. Prepared with careful regard to all of their individual allergies, of course.

By the time the food arrives, the husband with the indescribable hair is still on the phone somewhere in the restaurant. The woman asked my waitress friend to “go retrieve him,” and that it didn’t matter if she interrupted his conversation.

Sure enough, the woman started complaining about her food and sending things back. After eating half of a lobster, it was “too tough.” The salad dressing which she was enthusiastic about ordering was suddenly “terrible” and didn’t “go with the lettuce.”

In keeping with her bizarre demeanor, the woman pulled my friend aside and said "look at those ladies over there. they look so wise and refined, do you think we'll look like that one day when we're old?"

(My response would have been; “If you live that long. You’re depriving your body of countless essential nutrients you claim to be allergic to. They‘re ‘wise and refined‘ enough to know better.)

Besides being flabbergasted (and probably nervous), my waitress friend was getting uncomfortable. The woman wanted the names of the people sitting at the next table, because she “thought she might know them.” My waitress friend actually decided to go bother them and ask who they were, but the real surprise was that she didn’t actually know who they were. I could have called that one too.

When dessert rolled around, she ordered desserts for her family that contained many of the things she claimed to be allergic to. She ordered a piece of cake for her daughter’s birthday, and as we may publicly acknowledge, cake often contains gluten, dairy, sugar, eggs, and all sorts of other things. Because as a birthday present, I would want my parents to give me death through anaphylactic shock.

It turns out that she wasn’t actually allergic to most of those things; she was just “a little sensitive.”

The whole ordeal took about three hours. To those who think that restaurant work is easy or undignified, imagine a day where you’re taking care of party after party just like this one.
Posted by King Devon the Magnificent at 10:41 AM