The Secret Shop - Another reason to act awkwardly

In many restaurant chains, there is a well-known tool that is used to guarantee uniformity throughout all of the branches. Since every member of the faceless corporate entity can’t be in every restaurant location at once, they hire everyday people to come into each restaurant on a regular basis and act like a regular customer.

As a method of keeping servers from acting too creatively, there are long lists of things each server has to say or do to guarantee the same monotonous experience for each person at every restaurant that bears the name of the parent company. 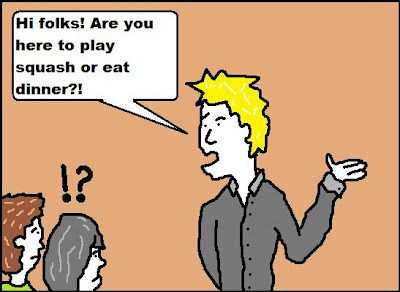 If you get a waiter who asks a question like this, there’s an equal chance that it could be one of two things; Either he has Asperger Syndrome, or he’s terrified of secret shoppers. 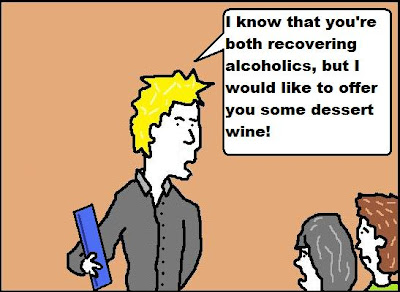 Restaurant owners and CEOs want their restaurants to look, feel, and function a specific way. If it means your server has to sacrifice his personality or make painfully awkward requests, so be it.

At my restaurant, there is a list of approximately twenty things that each waiter must do in order to score perfectly and not be punished (should a secret shopper come in and sit at his table). Although I will not list exactly what they are, I will give a brief list of examples that are strikingly similar. 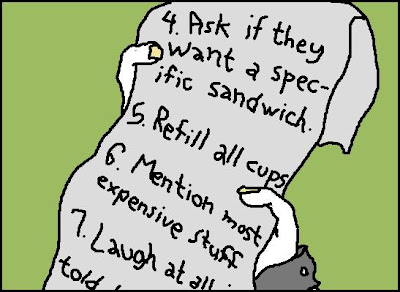 The problem with a specific list of things that you are required to do for each restaurant guest is that not every person who comes in to eat at a restaurant is the same. Each person is not waiting with bated breath to hear what you have to say, nor are they even remotely interested in you running through an entire checklist of things some corporate jack-offs drew up with the bottom line in mind.

If your server is required to refill your beverage, he will do so whether or not you actually want one. That’s a sure sign that it’s a talking point on a shopper report agenda. 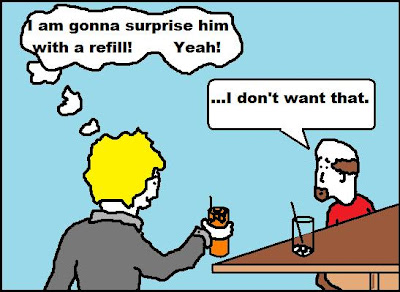 Let’s say you come into a restaurant and sit down at the bar. It’s one of your favorite restaurants and you already have an idea of what you want. The bartender approaches you and says hello. You, without looking at the menu, reply with; 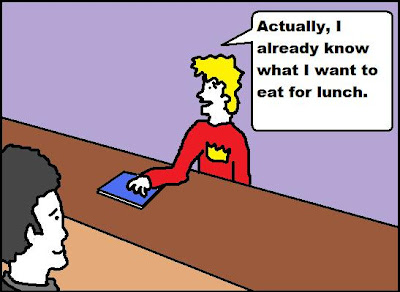 Let’s assume this is what you hear back; 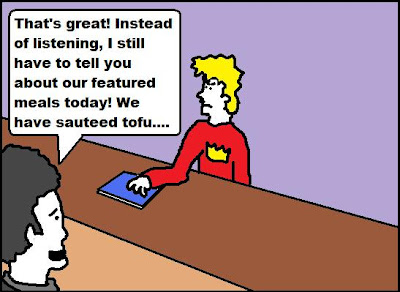 If you were a shopper, the bartender would be doing exactly what the company demands of him. If you’re not a shopper, there is a good chance that you’d be annoyed at your bartender for completely ignoring you.

Personally, I try to achieve each one of the objectives on the shopper report for each guest I serve as non-awkwardly as possible. I was shopped recently, and would have received a perfect score. Instead, I was marked off on one of the questions which I was certain I had passed.

After clearing away the two corporate witches’ meals, I asked if I could get some dessert menus for them to look at. They seemed keen on the idea, so I brought the menus over and offered them some coffee and a peanut butter cookie sundae, which was an off-menu item. I found out later on that I had failed that part of the shopper report. The question I failed;

“Did your server offer you a specific dessert and after-dinner beverage?”
The reason I failed;

“Our server offered us menus, and then only after bringing us menus did he begin to talk about a specific dessert or beverage.”

Sure enough, I was furious about having been spoon-fed a heaping mouthful of bullshit. If you are that painfully specific about an objective which WAS carried out within seconds of when it was supposed to, you are overlooking the fact that two or three seconds worth of time will not upset a guest so much that it will lose the company a paying customer.

If I do everything I am supposed to and excel as a waiter, don't correct me for something I didn't do wrong. That's how you force good employees to quit and find other employment.
Posted by King Devon the Magnificent at 11:34 AM