In any restaurant, there are "Regulars." These are the people who come in semi-frequently, order the same thing, tip the same way, and who are either easy to take care of, or utterly impossible to deal with.

In the latter category, you have the basic type of person who wants to sit in the exact same seat every time, order the same thing with over six thousand guidelines for how to prepare it, and often won't tip generously, but assume that he or she is doing everyone a huge favor by coming back over and over again.

When something doesn't go right, they tend to become irate; 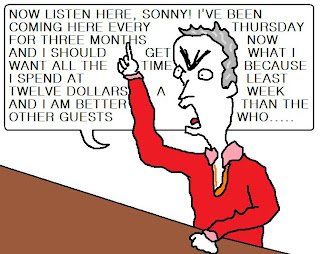 One of the bartenders I know had a great story for me about one of these crotchety old attention magnets. He sat down at his usual seat at the bar, and instantly began making demands; 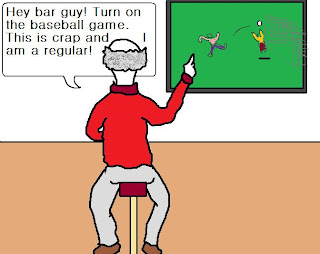 Instead of conceding to the regular's demands, the bartender responded with care and concern for all of the bar's patrons. It went well. 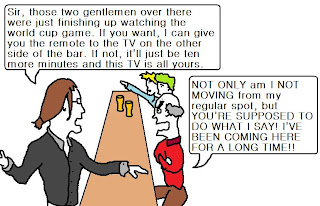 As expected, the old fart didn't pay any mind to the offer the bartender made for another spot at the bar that had a television for his own personal viewing. He expected that he didn't have to move from his seat, and wanted the other people at the bar who were watching world cup soccer to lay down dead for him and his baseball game.

Now I agree that soccer is gratuitously boring. But I disagree wholeheartedly with anyone who comes into an establishment and demands that he get his way (no matter how unpopular) just because he's been there a few more times than the others. I will say one thing for soccer, though; it has the rowdiest fans in the world. I would have loved to have seen what would have happened if the bartender had changed the TV to the baseball game this guy demanded. The soccer guys probably would have kicked that prick's wrinkly old ass inside out.

Seemingly in an effort to convince the bartender that an extra ten minutes of equivocally boring baseball was worth an eternity of shouldering the identity of "complete fucking douche-bag," the regular demanded a pen and paper to begin mathematical calculations of his tips for the past year. 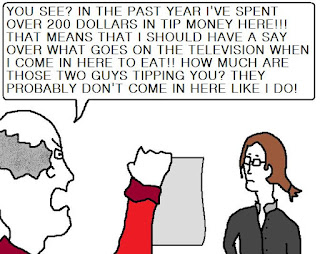 If he were trying to assert that he comes in enough to place a monetary value on his time there, it would mean that if the two soccer fans had tipped $201 dollars on their meal (not so unreasonable--people have left tips of this magnitude before), it would mean that they should now have a say over what everyone else at the bar watches.

If those two soccer fans were regulars themselves, the regular probably would not have had his way either because it would have devolved into a pissing battle between the opposing customers. There would be no civil way to determine who was more 'regular' than the other.

The only fair and sane way to determine who gets the TV is to simply allow those who arrived first to control what goes on. When they leave, someone else can request something to watch. Speaking of what to watch, the regular changed the channel after the soccer-viewers left just in time to find that there WAS NO BASEBALL GAME. It wasn't even on that evening.

Just goes to show you that just because you're a regular doesn't mean people there are forced to respect you, and it CERTAINLY doesn't mean that the people there LIKE you. Bear that in mind if you frequent a place you really enjoy going to.
Posted by King Devon the Magnificent at 2:00 PM