A lot of things I write about are severe annoyances to restaurant staff, but what happened to me recently really tests the limits of what most servers are trained to address with any amount of optimism.

I definitely had the worst day in the history of restaurant work on this particular day. Not only were there no English-speaking people around for me to take care of, they all conveniently used cash to pay for their checks. This means there was no possible way I could get any kind of a tip greater than two bucks and thirteen cents worth of "keep the change."

But then this gem of a human being came in to eat. Something wasn't quite right about him, but I don't think I could have decisively said what it was. He was an older bloke, not terribly perceptive, prone to conversational redundancy and verbal self-contradiction. 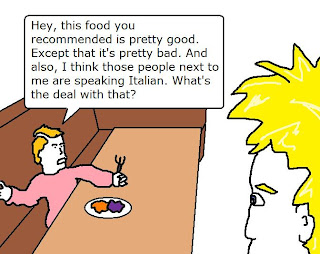 On second thought, I'm completely convinced he was retarded.

He asked for his bill, and I gave it to him pretty quickly. The convo happened like this;

Crazy guy; (Rifles through wallet for about two excruciatingly long minutes) ...Urmarm...I guess I don't have the money I was going to give you for the food. Oh wait, can you change this hundred dollar bill I just found?

Me; Sure can. Leaving now.

After I went and broke his hundred dollar bill, I considered my options. In any other circumstance, I would have take the cost of his food out of the change, but I thought in this particular instance that he wouldn't have quite understood what I did. Which actually could have potentially turned out in my favor, come to think of it.

Instead I did the opposite of what made sense, guided by my compassion and concern for this man's ever-weakening grasp on the world around him. I walked back with all $100 dollars of change and proceeded to count them out right in front of him. I finally concluded triumphantly with "...99, and one hundred! All there sir. I'll pick up the check in just a second."

I returned several seconds later to find that he had left three of the dollars on the table, but not any money toward the actual bill. I instantly got angry. Did he NOT see me give him back all of the change? Is he really that far gone? Why wasn't I not stupid and why didn't I just do what I would have normally done?

The worst part was, given the horrible 5-6% tipping on the other three tables I had, I now was indebted to the restaurant for this particular table. Coming into work yesterday for six hours actually COST ME MORE than if I had stayed in bed eating graham crackers and watching Maury issue paternity tests to deadbeat fathers.

In most restaurants, there is a specific policy for what happens when people ditch you on a check. In the last restaurant I worked in, the Chinese people in management made it clear that if someone leaves without paying, the waiter was charged with paying HALF of the bill out of that night's tips. If it happens again? The waiter pays the WHOLE bill. I didn't even want to imagine what the third offense was.

In a corporate chain, I imagine the rules are slightly different, but I suppose I'll find that answer out soon enough.
Posted by King Devon the Magnificent at 9:08 AM