The pervasive cliche of the "Health Inspector" is a notion that scares restaurant managers into operating their kitchens as strictly as possible. It makes waiters, chefs, and other assorted employees do things like wear gloves when they touch silverware, not eat twizzlers while operating the deep fryer, and not serve chicken cutlets to guests that have since been accidentally dropped on the floor in excess of four times.

Some restaurants take this notion to the next level on their own volition, seemingly to make it seem like Jesus Christ sits down to dinner there every Sunday afternoon. These restaurants bring their own health inspectors, paid for by the company, just to come in and "make necessary health changes to the restaurant's operating procedure." Oops, that was a typo. What I meant to say was "fuck with everyone for absolutely no reason."

A health-inspector came in recently to one of the restaurants I work at. She wouldn't be worth her six-figure salary if she didn't come in and fuck with everyone and the fruits of their labors at completely fucking random. 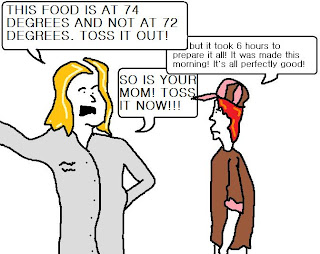 They do this to reassure their mass market that they are completely perfect and would never put food in front of you that would put your health or well being at any risk.

-If you throw out hundreds of dollars worth of food that is one or two degrees warmer than specified temperature, the company is losing money. And wasting food. In a time when being green and non-wasteful is a selling point, potential customers will look down on you for committing such heinous acts of waste.

-By tearing apart a restaurant that you spend less than 1% of your time at, you are effectively tearing down and destroying the hard work that people who make 1/50th of your salary are spending their mornings and evenings doing. This creates unnecessary resentment, and could possibly endanger your life.

-Many of the issues that you are "circumventing" are trivial and uncontrollable, and should not be blamed on employees. They deal mostly with the poor functionality of equipment and appliances. Explained; if you fail restaurants and suspend employees for things like refrigerators not being cold enough, you are misdirecting blame and targeting the wrong issues to "resolve" the problems.
Try fixing the refrigerators and replacing the air conditioning in the sweltering kitchens instead of firing the line cooks.

-Instead of tying the management of the restaurant up in meetings to address problems during business hours, try remembering that there are people trying to have lunch who aren't getting their concerns addressed by the people who are paid to reassure them.

-Because the health inspector was yelling at various members of the kitchen staff, a 5-minute dish which was supposed to get to a table that was in a half-hour hurry took more than 40 minutes to arrive. Instead of having a quick lunch, they spent the better part of their lunch break thinking their waiter was an idiot and couldn't handle a simple task. And they left hungry.

If you don't work on the restaurant level, it isn't that hard to pay simple attention to the basic things that pay your salary every week. While breathing down the necks of people who are trying to provide a good evening to the everyman, you are ruining the experience(s) of the people who pay your overblown salary.
Posted by King Devon the Magnificent at 12:04 AM