The Necessity of Micromanagement

The true telling factor of what life is like in any restaurant depends heavily on the competence of its management team. In privately-owned restaurants, managers are typically the friends of the head boss who can be quite demanding, but who are agreeable, sometimes fun, and actually have souls.

The managers at a chain restaurant have to adhere to codes and endless tirades of corporate propaganda in order to do things like "effectively govern" and "keep their jobs."

Due to the tier-based trickle-down effect of management wisdom implied by the latter example, many disastrous things can happen to the basic base-slave. Oops, that was a typo. I meant to say "waiter who has slightly fewer freedoms than an indentured servant with debts to the mafia." 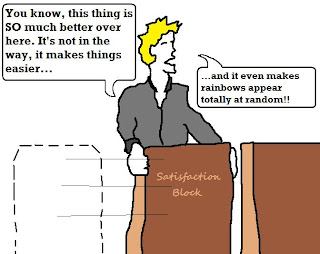 At this point, someone from management usually comes over to stifle your creativity and squash any impressions you have of any kind of utility by saying something non-confrontational like; 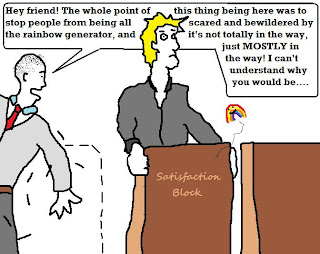 ...but in reality, the manager in question has no idea what you are doing, why it is necessary, or even why he or she has to venture any form of commentary. But something needs to be managed, and at that point in time, that something is YOU.

You may even try to argue; 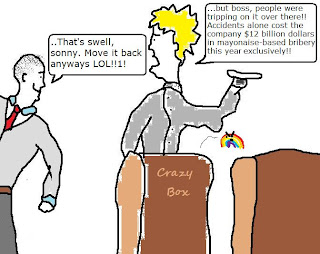 But in reality, no manager in a corporate chain will ever listen to a better idea, even if it would revolutionize the way the company does business. Paperwork would have to be filed, people would have to be satiated, credit would have to be due. All in all, the company's CEO would probably love the idea you had if you and the guy were face to face. The reality of the situation is that no matter what you try to do or who you try to subvert in order to create a better working environment, you'll be strangled with red tape from the lower management team to the very top of the pile of assholes running HR for the company.

So you do the only thing you know how;

You get wasted after your shift with your coworkers and bitch about how dumb everyone is. Then you wake up the next day and go right back to work.
Posted by King Devon the Magnificent at 12:04 AM