If I had to describe the way the industry standard in the US denotes tipping, I would say it is "inconclusive." I would then say "hand me a bunch of dandelions, because Ray Bradbury taught me how to make myself drunk with these. Also I'm poor."

What I'm trying to say is that the methodologies of tipping in the United States mean just as much to the layperson as the fundamental intricacies of "time travel," or "health insurance."

Take last night, for instance. I had a huge group of men (and one or two margarita-drinking-NOT-men) celebrating a birthday party. By "celebrating," I of course meant, "ignoring the person responsible for their libations." 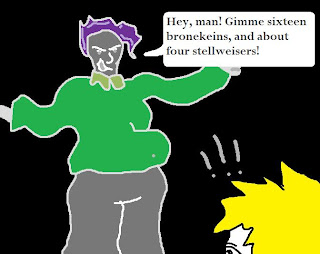 After ringing up a significant check, I counted the money and was left with less than 6% of what I brought them.

This was upsetting, but most servers (pussies like myself) aren't comfortable with approaching a poor tipper to ask what the problem was. This is acceptable only if you have big enough balls to bring it up in the most passive-aggressive way humanly conceivable. 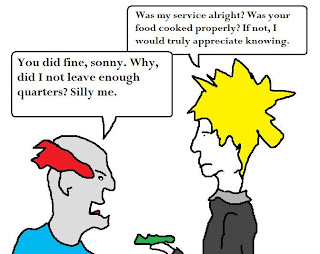 I was lucky enough to have a fellow worker looking out for me, casually mentioning that his buddy only got a few bucks for an hour's worth of serving beers and tactfully ignoring poorly-constructed penis jokes.

I was approached shortly afterward by a drunken fellow, apparently the Deanna Troi of the group, who handed me a few more dollars and apologized for the drunken misdemeanors of his rowdy and under-cognizant friends.

I was relieved that someone nearby had a true grasp of the scenario, but stunned at the notion that people who have never been formalized in the fine arts of tipping or basic mathematics consistently find that they have aged twenty-one years on this earth with no knowledge of the industry standard.

Yet, it happens all the time.

It's the subtle relationship we share which determines who of us make rent and whom do not.
Posted by King Devon the Magnificent at 10:40 PM