They strolled in five minutes before the venue closed. They walked up to a table they thought was theirs by default and sat themselves right down, paying no regard to anyone or anything that might have held their attention or needs. They proceeded to ask angrily for menus, assuming someone had seen them.

They were....the party from HELL.

It's not that people from a specific region did anything wrong, it's just that THESE specific people from this SPECIFIC region did EVERYTHING WRONG, and deserve a SPECIAL place in HELL.

I used enough capital letters in order to MAKE a POINT, and will STOP AT NOTHING in order to MAKE A CERTAIN SIX PEOPLE PAY for their CRIMES, REGARDLESS of the GRAMMATICAL FAUX PAS'S of the ENGLISH LANGUAGE. But I DIGRESS.

Imagine a group of six people, sitting down at a table right before the restaurant closes.

They order a bottle of fine wine; 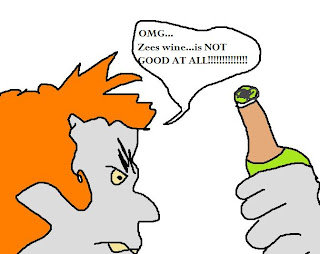 ...now, this ain't exactly a two-buck-chuck from the local Trader Joe's.
This might rather be an 80-dollar caviar wine designed to palate the tastes of the gentleman who wants to club a golf course manager to death who hasn't yet made the required connections with the people in charge of swaying his shot.

This guy has a chip on his shoulder.

He came to eat with his friends, and tried in vain to impress the living shit out of them. He sent back an important bottle of wine, and instructed his friends to order a new thing for every time his server reached the table, implying that a relay race was somehow afoot.

They asked for tartar sauce. They asked for lemons. They asked for cocktail sauce. The kitchen was closed, but one of them still asked for a baked meal, and complained that it wasn't prepared the way he was used to. The head honcho sent back a bottle of wine, and despite the fact that the bar had already closed, he asked that a different wine would be opened for his table because he simply "didn't like" the previous one.

This attitude would be somewhat easier to deal with if the restaurant weren't closed, but alas. The convenience of a couple of strangers will always come closer to the needs of the one person with a posse of internationally-inconsiderate dick-noses.

This man and his friends had no intention of going anywhere, and they each wanted to know why there weren't any complementary mints or dental floss.

All while the table persisted, you contemplated the very reason why you wouldn't have gotten home until 2AM, you couldn't find anyone in the kitchen to make your food, or why you couldn't possibly have pleased anyone for any reason.

And then Murphy's Law enters your mind.

...and you then wonder what it is you did to deserve it. And there is no logical answer.
Posted by King Devon the Magnificent at 11:41 PM