There are always subtle things that make servers angry. Most times, people don't realize they're being shitheads until someone tells them, but in this entry, common courtesy is the one thing lacking in the people I'm choosing to come down on. Which makes it OK.

One of the things that I absolutely abhor is the way some people completely ignore you when you approach them. 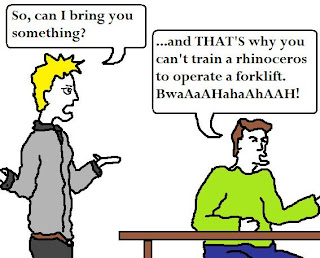 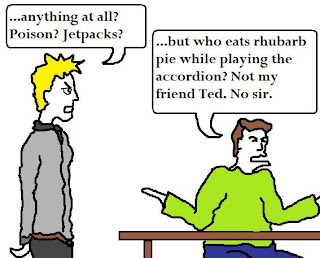 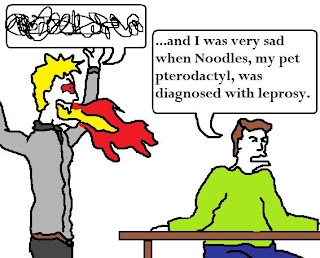 Most times, people who do this have no concept of anything but themselves. They'll prattle on and on about some shit that nobody cares about, completely forgetting that the reason they came to a restaurant is because they are SITTING DOWN TO HAVE A MEAL. In order to do that, the person or people who can't shut their fucking mouths long enough to pay attention to anything else need to actually pause and give their order to a SERVER in order to be fed.

These kinds of people usually expect that they don't ever have to stop speaking. They assume that their food orders are transmitted telepathically to the kitchen, prepared instantly, and placed in front of them without having to break their preciously trivial stream of consciousness for two fucking seconds in order to speak to the waiter.

Even worse, there are the kinds of people one of my friends had to deal with. A long-time coworker of mine, this girl approached the table of six that she was assigned FOUR TIMES in ten minutes to try and take down their order for dinner. Needless to say, these cock-brains just kept right on blabbing their dicks off the entire time, completely ignoring her. Assuming they weren't ready to order after the fourth unacknowledged trip to the table, she went off and did other things for a brief period, only to hear that the people at the table were pissed off that nobody had come by to take their order.

These kinds of people are the worst kinds of human beings in any restaurant. Every waiter or waitress has a table full of shit-munchers like this at least once per shift. If not for common courtesy, these people should at least know that servers don't generally have time to wait around for ten or fifteen minutes for you to finish talking about whatever bullshit keeps tumbling out of your mouth until you are out of breath. Waiters and waitresses have to go around to the other four or five tables they have, refill sodas, open wine, process payments, run food over, and clean tables for new guests, and if you're not ready when the server is, you're just going to have to wait until that server has time to go around to you again. However much you think you're worth, a server's time is worth infinitely more than yours.
Posted by King Devon the Magnificent at 10:39 AM