Seven Words You Can't Say In A Restaurant

Hey readers. Just to curb any chance you may have thought this post would be a delightful spin off of everyone's favorite George Carlin routine, there will not officially be seven words on this list. In reality, I can't imagine there's more than three words I've ever used in any restaurant environment that have received more than a cocked eyebrow.

I guess I'm just a sucker for campy names when it comes time for a serious post.

Let's get down to brass tacks.

Despite the fact that the restaurant is the only professional forum where it is okay to talk about things like nipples, rectum massages, skullfucking, cauliflower, and Ronald Reagan, I've discovered the one topic which is completely taboo. Ironically, the only phrase you can't mention is "sexual harassment."

If someone feels "sexually harassed," the harasser's career at the restaurant is almost certainly over. 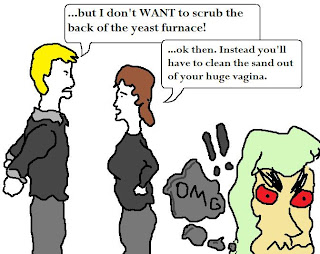 You see, in the restaurant, waiters, cooks, bartenders, and even the non-English-speaking support staff will constantly be quipping back and forth in the most perverse manner attainable. As mentioned in earlier posts, homoerotic suggestiveness and depravity are all but acceptable in the colloquial dialogue of the restaurant underbelly. This isn't to say that if someone on the staff were uncomfortable, that that person would not be accommodated. They rest of the staff would almost certainly spare the one affected person/lesbian/feminist/socially awkward malcontent/overly-conscious idealist if that individual were to publicly and knowingly isolate his or herself from the crude fracas.

If that one person decided to go to the management with his or her concerns, that person would be doing a gravely unacceptable and irreversible thing. That individual would be broaching a topic that would upset the very balance that helps keep the restaurant staff friendly, trusting, and above all, sane. That person would potentially get someone fired because he or she feels they have been SEXUALLY HARASSED.

The caveat in all of this is that the person affected doesn't necessarily have to be the subject of any of the things said or done. That would be too easy. The person can overhear a joke, read an obscure word, or even receive an incorrectly interpreted glance in order to retaliate and get someone fired. If the person accused happens to be a respected or well-liked employee at the restaurant, then the accuser will have made an enemy of everyone at the restaurant. That person will be retaliated upon in every legal manner capable by the restaurant's staff.

His or her tables will be repeatedly sat with destitute high-school students and families with screaming infants. That person's side work will become the most rigorous, often involving scrubbing toilets and counting toothpicks. Nobody will talk to that person without necessity.

The staff of the restaurant protects its own, and will quickly make enemies with those who threaten that sanctity. Forever.
Posted by King Devon the Magnificent at 12:07 AM