Before I get to brass tacks, I'd love to thank you all for keeping Tales from the Restaurant frequented. After logging 15,000 views, I'd like to think there's been an impact made on the general population from a true representative of the industry. Thanks again.

Between my computer breaking and losing a good chunk of my photos and data (combined with searching for a more predictable occupation), it's been tough to schedule serious time to devote to the cause. But it's safe to say that my work isn't done, and my lack of updating isn't impressing anyone. I plan to return to the task at hand in full force.

That said, I clearly haven't reached people like the shitheads who came in to eat last Wednesday afternoon, so I certainly have a lot more work to do. Let's take the gloves off.

I took a reservation for 25 people who identified themselves as the “Turkish Ministry of Health." It was around lunchtime, so I thought it was going to be a typical, businessy 'in-and-out' sort of thing. One of these days I'm going to simply know better. Until then, feel free to step up, assume a firm grip on common sense and then use it beat my thick skull in.

The group of suit-and-tie clad cock jockeys fired strongly out the starting gate by showing up an hour and fifteen minutes late for their reservation. Anyone in my shoes would have rightfully canceled their reservation, pushed the tables back to their original configuration, and laughed politely as they strolled nonchalantly into an accurately functioning restaurant business model. But as it happened, it turned out we weren't that busy when they showed up. So we pushed the tables back the way they were and sat them.

I don't know what it is about professionals who show up from various embassies to eat. It always takes place during lunch, 99% of the group is always struggling with English, and the demands of the head honcho usually take the staff on a Marco Polo themed tour of the dining room in a futile search for the perfect table that often finishes right where it started. And since they're all in suits, it occurs to nobody to tell them off.

The table we had happened to have arranged for them was about ten feet away from the bar. According to the head translator of the Turkish Health Ministry, this was a "GRAVE RELIGIOUS INFRACTION."

The dignitary responsible might as well have reacted like we just exposed him to an airless vacuum. I would rather choose to represent him as a fanatical religious robot. 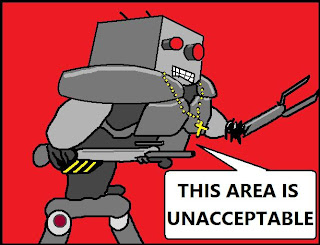 Acknowledging one's religious beliefs and finding a solution isn't usually a problem. But in the restaurant world, it typically throws a kink in the works if someone conscientiously objects to your non-secular ways of forcing them to eat in close proximity to sinners. 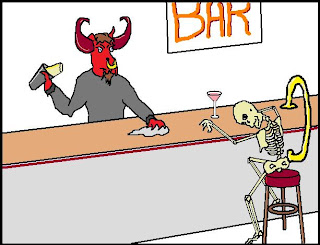 So one of the men in the party casually suggested that the entire party move outside.

The completely vacant outdoor patio happened to be available on account of the less-than pleasant temperature and the ostensibly ominous clouds overhead. So my boss allocated four staff members to rearrange the tables outside to accommodate them. Most people who want to spend any extended period of time outside typically check what the weather is going to be like while they're walking around the square.

If I had to guess where the priorities of foreign dignitaries lie, the last thing on the list would be "what the weather will be like at the precise date and time that I would like to drag 20 foreign editors of health policy outside of the sin-minefield-that-is-the-bar-and-restaurant-where-we-made-reservations.”

As soon as the Turkish Health Ministry got settled in, their particular God decided that it would serve them right to open up the skies and shower them in heavy rain. 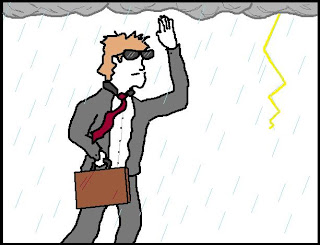 You may very well consider that by this time I was trying my hardest to suppress a hearty grin while observing these horrible souls running for cover. Thinking they would see the humor in it themselves, I immediately ran outside to make peace and recover the menus. I meekly asked them all for a modicum of assistance.

I asked them collectively, "Can you help me out and bring your menus inside with you?"

Our unspoken war of non-compliance continued as they each completely ignored me and ran inside, each menu meanwhile disintegrating beneath the torrents of rainfall. Nine of the paper-inlayed menus I was trying to save were destroyed by the rain.

So the men all ran inside and proceeded to sit without instruction or guidance at their original table, in complete defiance of their own religious double standard. As if that wasn't bad enough, they sat down, demanded NEW menus, and one of the men pulled me over to tell me an important piece of information; they were all now hard-pressed for time and the 25 of them needed to have their lunches finished and paid for in the next 40 minutes.

At this point, I was furious enough to have reasoned a few counterarguments that would have surely gotten me fired.

If timing was so gravely important, why didn't you all simply;

A) SHOW UP ON TIME FOR YOUR FUCKING RESERVATION

B) SIT THE FUCK DOWN WHEN YOU ARRIVED instead of DRAGGING US AROUND BY OUR DICK HAIR FOR 45 MINUTES LOOKING FOR ANOTHER TABLE THAN THE ONE WE SPENT 20 MINUTES ARRANGING FOR YOU?!?!

When I brought one of the dignitary's briefcases in from the rain, he simply took it from me and said casually,

“Well aren't we just a big pain in the ass?”

To which I felt I could only reply,

Sure I'd had a few responses prepared. But I also remembered how hard I could later immortalize them here. I can only pray that someday, when I have some high-powered jack-off job where I can dress as well as I please, that I decide to go out and attend my reservation at a favorite restaurant of mine. I'll ask to sit outdoors, and when I do, I'll look up at the sky and wait patiently to see whether or not my deity of choice thinks I'm a complete asshole.

And if I'd stepped on enough harmless people by that point to get to where I was, I'd grab some nails, a hammer, and some plywood and start building a fucking ark.
Posted by King Devon the Magnificent at 8:04 PM