The Tale of Baked Potato Man

When you work for a period of time in a restaurant, you tend to get better and better at sharpening your wits in situations that require excessive damage control. Just last week alone, I called a woman with short hair "sir," I mistakenly brought a Diet Coke to a morbidly obese woman who had asked for regular Coke, and even went to hand a guest a pen to sign a receipt, but ended up accidentally flicking it end-over-end until it smacked him in the face. These situations can be fixed with a few well-placed words and a free dessert, but nothing can compare with the great mistake of letting a regular guest order something that isn't on the menu.

This is perhaps one of the most odd people I've ever met in my restaurant career. Although there's nothing immediately wrong with him (or requiring rapid medical attention), you can just tell that when this man walks in with his uncombed Bob Ross hair, enormously thick 70's era rapist glasses, and a canvas sack that he wears around his neck, that there's no way he can be allowed within 500 feet of a playground. 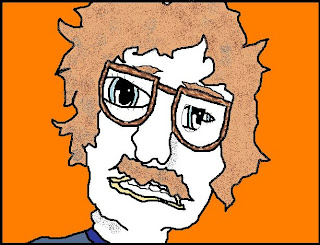 After his last visit to my restaurant, a friend he was dining with told the waitress privately that she "hadn't seen him in about ten years, and he's apparently developed a....thing."

Included in that is this man's ever loosening grip on the world around him. Here's why I think that.

At my restaurant, we do not offer baked potatoes. At one point in time (a few years ago), baked potatoes were a viable option where I work for people who decided that they didn't want their potatoes mashed or "french fried." I suspected that because the potatoes were made in batches of 20-30 and were selling at a rate of about 1 per hour, it became economically unfeasible to continue to leave them on the menu.

What people don't understand is that when you order a baked potato, you're ordering a specific kind of potato. It's usually a darker russet potato, a root vegetable which takes well to a convection oven and is usually not much bigger than your fist. These kinds of potatoes don't typically do well to mash, and fries are usually pre-made in 99% of restaurants. So when someone insists on being served a baked potato, I take absolute hedonistic delight in how the next 45 minutes plays out. 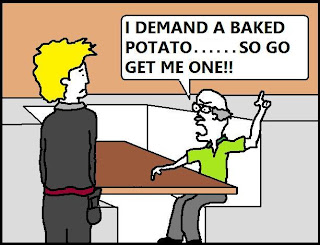 I usually explain a more concise version of this to the irate guest, and let him or her know that they're going to have to wait just under an hour (in addition to the time it takes to prepare the meal) for an individual Yukon Gold potato bigger than a college football to be cooked all the way through for them. And I usually mention as an afterthought that it'll taste like shit.

Usually this is enough to not only deter people from straying from the menu, but from severely inconveniencing the kitchen. But not the Baked Potato Man.

Instead, he just sits there and gives you what my coworkers and I have deemed the "Unibomber Stare." 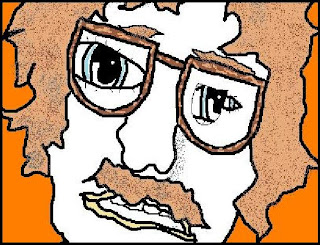 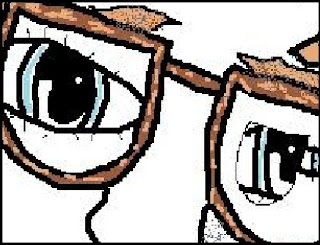 I feel that whatever trauma this man suffered through rendered him unable to process that baked potatoes were nearly impossible to put in front of him. So he eventually wins every standoff with something like. 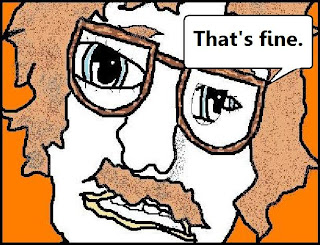 As a restaurant server, the absolute WORST thing you can do for your career and the well-being of your coworkers is to simply give into what I've deemed "Restaurant Terrorism."

So I did. The first time it happened, it all played out exactly the way I described. Baked Potato Man was overjoyed that his baked potato arrived an hour after the rest of his meal. He spent another two and a half hours eating it.

The next time he came in, I was determined to hammer the lesson home. I explained once again that we don't offer baked potatoes and told him that since the kitchen was exceptionally busy tonight, baking him a new potato would take perhaps over an hour. He reacted accordingly.

I went into the kitchen and spoke with the chef, who was a recent addition to the team. I let him know that this guy was a repeat offender, and to take as long as humanly possible to fulfill his obnoxious request. After that, I returned to the table to reiterate that I went completely out of my way to make sure his order was tended to with all of the care and determination we could muster. What I didn't know was that the new chef's pride was going to be a problem.

A moment later, he interrupted me with a tap on the shoulder. I turned around, and he was holding a fully-cooked, regular-sized potato, adorned lovingly with butter and sour cream. A mere eight minutes had passed, and already here was the baked potato.

Baked Potato Man was ecstatic. He dove into that potato like it was a sandbox at a playground. I took the chef off to the side and had a private discussion with him. Not only had he just encouraged this man to continue to order things we don't offer, he had undermined my authority at the side of the table and reduced my credibility to nothing (which probably didn't matter--this guy is deliriously obstinate). I bet that the next time this guy comes in, he'll bring all of his strange friends and will have briefed each one of them on how easy it is to get a baked potato at my particular restaurant.

And I fear that if one day we decide to put our collective foot down and tell him that he can't have what he wants, I suspect I'll have a package in the mail the next day that will blow my arms off and may just kill me.
Posted by King Devon the Magnificent at 12:31 PM