If you’re wondering why I haven’t posted any new restaurant tales in the last three weeks, you are probably reading this now for one of three reasons. Either you;

A) Think I’m a fantastic writer who deserves the leniency and undying devotion of an anonymous audience in order to support his craft
B) Live with your parents, are unemployed, and really have nothing else to do
OR
C) Really hate me and are wondering whether or not this next post is a device being used to announce or predict my own untimely death (such as a suicide note)

I’ve just been injured and unable to work. I’m not dead after all!

I returned to work in the restaurant after ALMOST dying, and almost immediately found myself able to pick up where I last left off!

Here’s the next installment. Oh, and for those who picked letter ‘C,’ I’m really sorry to have disappointed you.

If you’re a regular human being, you probably have a restaurant or bar (or even two or three of them, if you‘re me) that you really enjoy going to. These places are typically somewhere where you go to relax; you trust the cuisine, the atmosphere is ideal, and you are probably on a first-name basis with the people getting you loaded.

That said, there are certain things you may see when you are there which you are more likely to overlook. 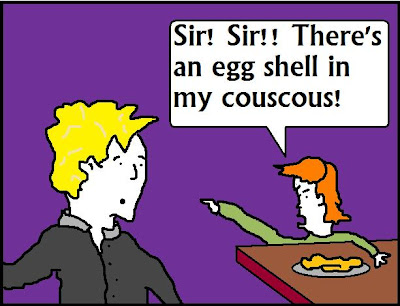 Depending on your tolerance for the locale, you may adjust this particular preference to taste. 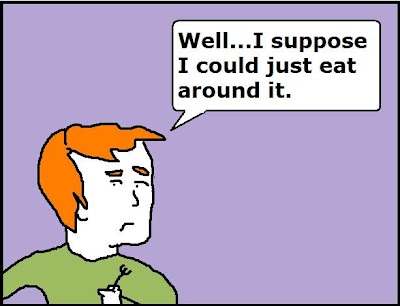 If you’re an established regular at that place, you probably wouldn’t send the whole meal back. After all, you’re on a first name basis with Hugo the owner, and his feelings would be pretty hurt if he knew you weren’t happy with your croque monsieur.

The situation changes however, when you’re not a regular patron of a particular restaurant. Not only will you look at everything under a microscope, you’ll be more encouraged to be critical (especially if you’re at a function on someone else’s dime). 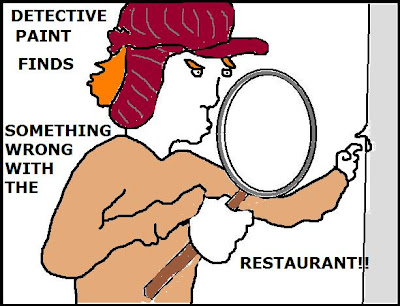 In one particular instance, I was helping a fellow waiter of mine clear the tables at which his party was sitting. One of the patrons abruptly grabbed me by the arm. 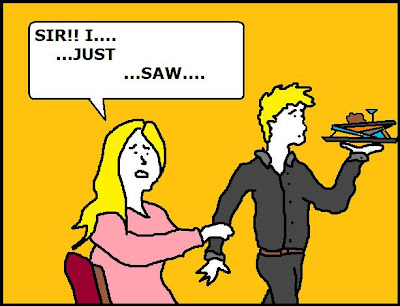 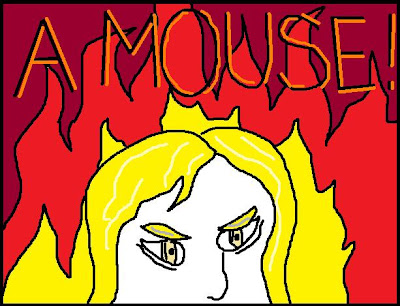 Mice are nothing new to me. Mice tend to sneak into homes and restaurants all the time. They whiz around at lightning speed, constantly terrified to be discovered by humans. They’re the very reason why all restaurants are required to store their food at least six inches off of the ground at all times.

But most folks don’t know that.

Most people will see a mouse and then immediately classify the restaurant they’re currently in as a dilapidated cesspool of rank filth, unworthy to even be judged by 3rd ½ world standards.

So I decided to ease this woman into the realm of restaurant reality. Our conversation ensued as follows;

Woman: “Aren’t you going to do anything about it?!”
Me: “I don’t think so. That mouse is way too fast for me to even attempt to catch it. Best we can hope for is to let management know, set out a few more traps, and hopefully we’ll catch it by morning.”
Woman: “That’s not good enough. Do you pass health inspections here?”
Me: “Ma’am, not only do we pass government health inspections, we ace our monthly company inspections, which are much more rigorous than the FDA requires. I suppose if you had to wonder about the occasional mouse, let’s just assume that the mice conveniently hide when the inspectors show up.”
Woman: “That’s ridiculous.”

At this point, I decided that I should at least make the faux play at placating her. So I feigned concern.

With that, I turned and walked away with my stack of dirty dishes. I had a feeling this lady was infuriated with me and my color commentary, and that my incendiary words had inspired her to take her complaints to the next level. To my surprise, she didn’t mention the mouse to anyone else. The managers never caught wind, the server at her table was never told and as far as I know, the secret stayed between us.

This outcome could have been for several reasons. The first one that jumps to mind is that restaurant guests are fairly used to being placated. If they complain about something, restaurant staff are all pre-programmed to make sure that person gets whatever they need to buy their silence. When that doesn’t happen, the fragile illusion the customer has comes crashing down. When the realization surfaces that his or her complaints are falling on deaf ears, the customer will begin to take a tally of what they like about that establishment, knowing that the restaurant staff are not necessarily motivated to bend to the whims of the customer’s grievance terrorism.
Posted by King Devon the Magnificent at 8:37 AM