Throughout the neighborhood, plenty of people have been rather adamant about the notion that the rapture is a real thing that will destroy us all, we sinner scum. But has that stopped people from coming out to eat and being compassionate?

At every table I purposefully introduced myself thus;

“Welcome. I am Devon. As opposed to what you may have heard, we will be serving dinner throughout the duration of the rapture.”

Oddly enough, people bit. Old ladies got cocktails, young men got draft beers, and middle-aged people drained the reserves of Campari and soda water. With their parents in tow.

It probably helped when Y2K was a huge deal. It probably will help me for the coming 2012 debacle.

The rapture became a point of humor at every opportunity. 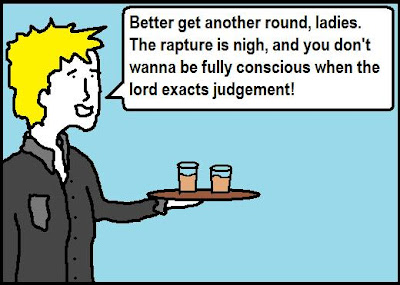 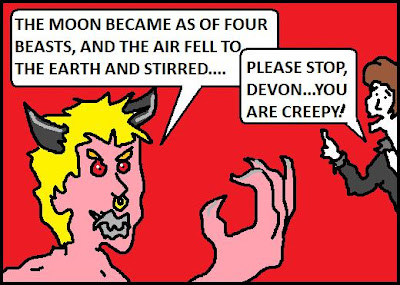 The amount of impious mockery I was making on a day when the earth was predicted to end probably wasn’t smart. If for some reason the rapture were to happen, I was doing enough damage to say to the powers that be “please strike me down first.”

I was actually a bit relieved when the power didn’t fail and the earth didn’t start quaking at my feet at 6pm.
Posted by King Devon the Magnificent at 9:35 PM