If you happen to work at a restaurant which has any degree of notoriety, you may at some point have an encounter with a celebrity. In the last year, I've had the chance to meet a few famous people. On a personal level, I'm not too fazed by celebrity. If you're famous and used to special treatment, I'll give you the same kind of service I give to everyone; the best I can.

Provided you don't suck as a waiter, any famous person would be happy with your service. Everything should go smoothly, and usually it does. The only issue is that people tend to get nerved up. 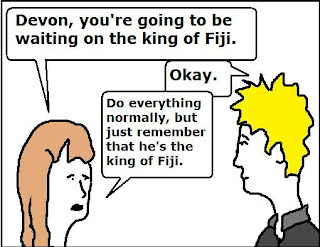 When I took care of a foreign prince and his throng of secret service agents, I didn't mess anything up. I was a great server and brought them everything they asked for. The man was not only nicer than 75% of the people I take care of on a daily basis, but he tipped an extra ten percent on top of the 18% party-assigned gratuity.

I always thought that if you ruled your own country, you'd be stressed out beyond belief dealing with political turmoil, attempts at your life, and getting reelected. Yet this guy was nicer to me than the old crabby-faced bag lady at the other table who has a sour attitude because she keeps leaving some magazine at work.

It truly is quite baffling.

Usually, everyone else around you is nervous FOR you. You don't have to actually mess up in order to make things awkward. 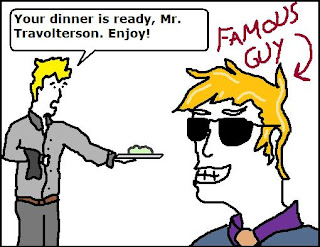 Usually someone else can do it for you. 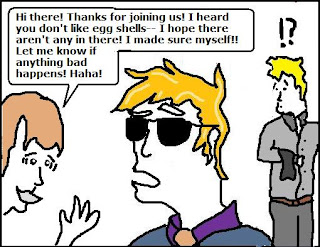 Maybe someone else notices. 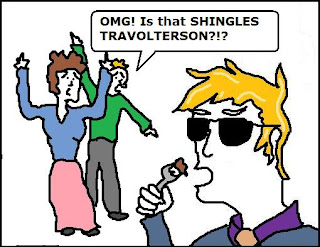 Oddly enough, someone in the kitchen might have screwed up, resulting in the need for managerial attention. One of my fellow waiters took care of a well-known movie star last week, and he was unintentionally served cold soup. The problem with that isn't that he was necessarily a special person who deserves extra care, but should actually be getting hot soup like everyone else. Unless it's gazpacho. Which it wasn't.

Which reminds me--who the hell eats gazpacho?! That shit is horrendous! Cold soup is gross, and it doesn't have to prove that it's the bastard child of minestrone and cocktail sauce. Pass on that garbage.

Anyway, some celebrities tend to get pissed off if they don't get treated somewhat normally. Which might cause your situation to capitulate in complete suckdom. 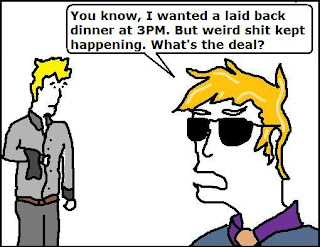 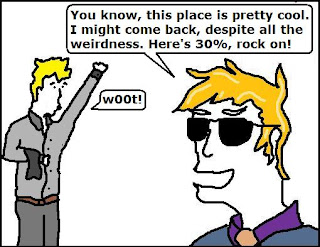 Restaurant joke of the week; 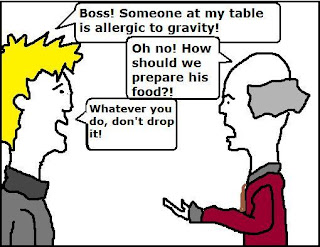 Posted by King Devon the Magnificent at 9:27 AM