Bread and Butter is the Demise of a Dinner 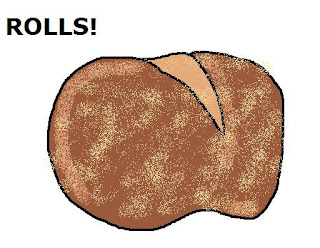 I hate bringing people rolls. Most restaurants have a free appetizer that they bring out automatically, and rolls happen to be the one I retrieve/hate the most. You might go to a restaurant and get a hunk of bread and a bowl of olive oil, or you might get some other kind of bread with some other kind of oily whatsit. But I hate them all.

The reasons for this are as follows;

-Rolls are free
You can immediately tell when someone is freeloading by uniquely identifying if they are the evil purveyors of 'rolldom.' When an old woman says; 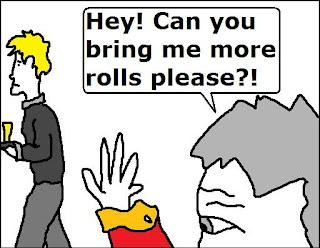 You are immediately sure of one of two things;

Option A: She's a freeloading crone who doesn't want to eat the cheapest thing on the menu without feeling like she got the best value for her meal. How does she do this? By calling out repeatedly for the one thing she doesn't have to pay for.

Option B: She enjoys the added security of having a hot breaded centerpiece on her table that she's not going to end up actually eating.

Another reason I hate when people ask for more rolls is because about 60% of the time, nobody actually ends up eating them. By the time the second plate of rolls comes around, dinner has actually arrived, and suddenly rolls are no longer at the center of their universe. Just their table.

On top of that, I'm usually doing things that actually matter when five of my idiot tables bother me for more rolls. I'll be bringing someone a glass of wine or carrying someone's dinner out, and five people are getting angry at me along my way because I forgot to bring them something they aren't there to eat. 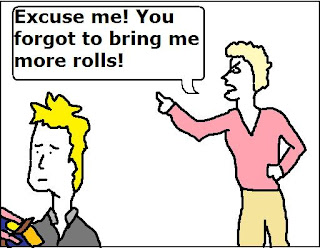 News flash; I didn't forget to bring you more rolls. There are a bunch of new tables that just sat down who are waiting for their own first plate of rolls. Inevitably they are also going to probably want more, but for right now, their need is greater than yours. I usually have a moment of intense calm when someone gets all indignant about me 'forgetting' to bring them more free bread. It is usually me convincing myself NOT to stroll right over and break my foot off in their left nostril. 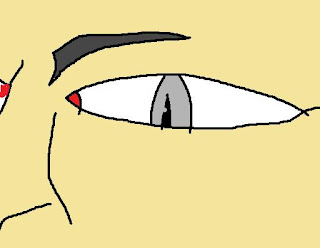 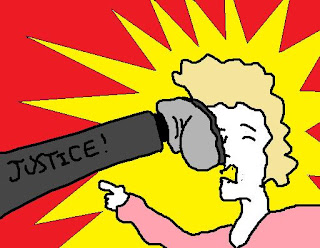 People's insatiable need to stock up on free shit truly bothers me in the context of dining out. When I go out to eat, I'm there for the cuisine, the atmosphere, the service, the libations, and the company of friends. I'm not there to bitch someone out about bringing me free snacks. One helping of rolls or bread is perfectly fine, but when you're hollering for three plates of them in lieu of an actual appetizer, that's when you become a total cock-breathed dingleberry.
Posted by King Devon the Magnificent at 9:11 AM